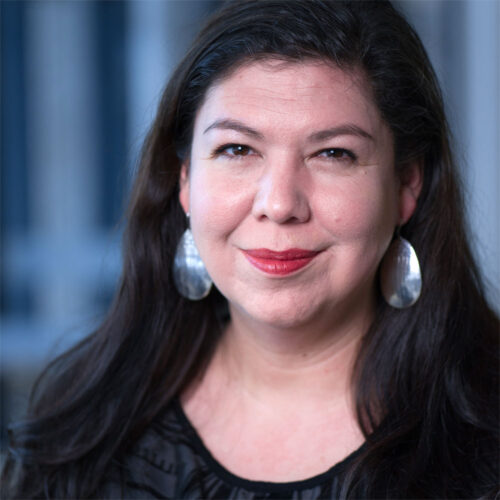 Dr. Tasha Hubbard is a filmmaker and an associate professor in the Faculty of Native Studies/Department of English and Film at the University of Alberta. She is from Peepeekisis First Nation in Treaty Four Territory and has ties to Thunderchild First Nation in Treaty Six Territory. She is also the mother of a fourteen-year-old son. Her academic research is on Indigenous efforts to return the buffalo to the lands and Indigenous film in North America.

Her first solo writing/directing project, Two Worlds Colliding, about Saskatoon’s infamous Starlight Tours, premiered at ImagineNATIVE in 2004 and won the Canada Award at the Gemini Awards in 2005. In 2016, she directed an NFB-produced feature documentary called Birth of a Family about a 60s Scoop family coming together for the first time during a holiday in Banff. It premiered at Hot Docs International Film Festival and landed in the top ten audience choice list. It also won the Audience Favourite for Feature Documentary at the Edmonton International Film Festival and the Moon Jury prize at ImagineNATIVE.

Her latest feature documentary is called nîpawistamâsowin: We Will Stand Up, a personal exploration of the impact of the death of Colten Boushie, that premiered in the spring of 2019. It opened the Hot Docs International Film Festival and won the top Canadian documentary prize. It has won numerous awards, including the Colin Low Award for the top Canadian film at the DOXA International Film Festival and the Canadian Screen Award for Best Feature Documentary.