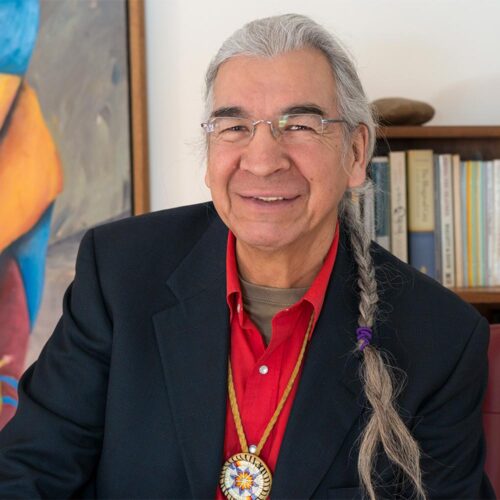 Joseph Naytowhow is a gifted Plains/Woodland Cree (nehiyaw) singer-songwriter, storyteller, and voice, stage and film actor from the Sturgeon Lake First Nation Band in Saskatchewan. As a child, Joseph was influenced by his grandfather’s traditional and ceremonial chants as well as the sounds of the fiddle and guitar. Today he is renowned for his unique style of Cree/English storytelling, combined with original contemporary music and traditional First Nations drum and rattle songs.

An accomplished performer, Joseph is the recipient of the 2006 Canadian Aboriginal Music Award’s Keeper of the Tradition Award and the 2005 Commemorative Medal for the Saskatchewan Centennial. In 2009 Joseph also received a Gemini Award for Best Individual or Ensemble Performance in an Animated Program or Series for his role in the Wapos Bay series. That same year he was also awarded Best Emerging Male Actor at the Winnipeg Aboriginal Film Festival for his role in Run: Broken Yet Brave, and won Best Traditional Male Dancer at John Arcand’s Fiddlefest in Saskatchewan. He has performed for the Prince of Wales, the Lieutenant Governor of Saskatchewan and many other notables. His demanding schedule continues to take him to conferences, symposia, festivals and art/research projects both nationally and internationally.

Fifteen years of study with a Buddhist master, combined with his nêhiyaw/Cree traditional knowledge and experience as an interdisciplinary artist, has nurtured Joseph’s generosity and compassion for sharing cultural knowledge. A much sought-after speaker, counselor, and educator for youth and adults alike, Joseph frequently enjoys opportunities to work as a resident artist and outdoor educator. From 1995 to 2000 he served as the Storyteller-In-Residence for Meadow Lake Tribal Council. More recently Joseph served as Emerging Elder with the Indian Teacher Education Program in Saskatoon, Emerging Elder/Artistic Advisor with Living Sky School Division, and regularly serves as advisor/knowledge keeper with various universities across turtle island.

Joseph holds a Bachelor of Education degree from the University of Saskatchewan. As an innovative artist, mentor, and a committed arts educator he fully embraces his own lifelong learning curve.